At the beginning of March, Highsted took part in an intense week of activities to celebrate British Science Week: a ten-day celebration of science, technology, engineering and mathematics. There were special in-class challenges to practise the engineering and design skills of all students. This report highlights a selection of the activities in which we participated.

In Year 7, students built a small boat out of straw and paper to see which design could hold the most mass before sinking. They also linked their knowledge of biological adaptations to design an insect that would thrive in a particular environment. Year 8 students were challenged to build the tallest tower possible of spaghetti and marshmallows and to create a poster on this year’s theme of ‘Growth.’ The Year 9 students also practised their technical skills as they built a lighthouse out of paper and created a simple circuit, as well as extracting DNA from strawberries. Year 10 students completed a thought-provoking activity to see how their personality might enable them to enjoy certain careers in the STEM field. 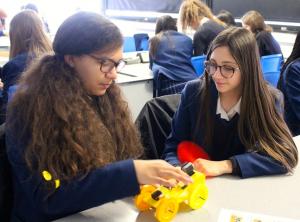 There were many lunchtime clubs and activities on offer. The week kicked off with students within the Animal Husbandry Club learning to care for Musk turtles, Sulcata tortoises and African clawed frogs. Students also had the opportunity to make sugar scrubs in the Cosmetic Chemistry Club. The Nature Club and Biology Society Club were also very active this week with bespoke activities.

On Tuesday, the Year 10 students listened to a guest speaker from Imperial College in London that discussed the importance of climate change and the critical technology of carbon capture and storage. Meanwhile students across the school had the chance to get involved with a chemistry scavenger hunt to find which teachers had badges for certain elements from the periodic table. 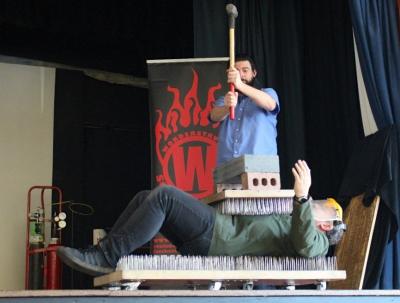 During Science Week, students across Year 7 and 8 marvelled at the magnificent demonstrations from the Wonderstruck Show. They wowed at balls of fire sent to the roof of the school hall, shrivelled at the thought of laying on a bed of nails and looked in amazement at the smoke rings as they travelled across the school hall. 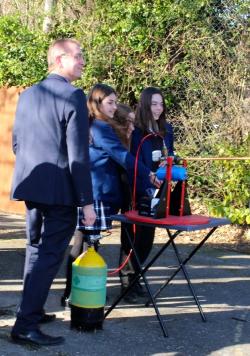 Year 8 built and launched rockets using compressed air across the school grounds, demonstrating the speed and power of a simplistic design. Year 9 built and modified fan powered cars to race across 8 metres. Congratulations to our ten finalists and to Team Wagon Wheels – whose car passed the finishing line to 4.19 seconds.

The week concluded with a memory challenge as students tried to memorise and recite back in order the entire periodic table. Many students had impressive displays of memory, and congratulations to Frey J who memorised the entire table.

All the activities – clubs, speakers, practicals, and competitions had one goal, to get students excited about science. Science is an intrinsic part of life and there are many rewarding careers in this field. Students were able to see the awe and wonder that science holds this week during British Science Week at Highsted.